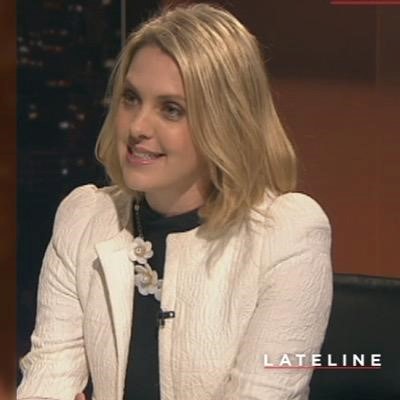 What this now-seasoned commentator wasn’t prepared for, however, was the staggering amount of vitriol she received after her first big TV appearance, in September 2013.

“I was tempted to never do it again, it was so horrible,” she says.

Georgie, then Acting Editor at Women’s Agenda, was invited on to Sky TV’s Paul Murray Live program, a one-hour show canvassing multiple topics with multiple guests. However, the big topic that day was a 5000-word essay written by dumped Labor leader Julia Gillard, published on The Guardian website.

A week previously Labor, led by a resurrected Kevin Rudd, had lost the federal election to Tony Abbott’s Coalition.

Georgie’s view was that Julia Gillard had done the honourable thing by staying silent throughout the campaign but now that the election was over, her lengthy, considered piece deserved thoughtful consideration.

“I’ve since learnt that Julia Gillard is a very divisive subject!” she says ruefully.

“Going into that first big interview as a commentator, all the things I was nervous about were, in the end, unfounded. What I wasn’t nervous about – and maybe I should have been – was how viciously I would be attacked. The social media stuff was so vicious and…that was quite eye-opening.”

Many of the show’s viewers felt Georgie was defending a rascal and a troublemaker. When she realised the extent of the attacks and their personal nature, she was shocked.

“There are times when I’ve been at the centre of quite ugly commentary but it probably hasn’t ever been as bad as it was that first time. I was tempted to never do it again, it was so horrible, but people who I admired and considered mentors said to me ‘If you’re being asked about something and you think there’s a different viewpoint to be expressed, you have to say yes. Because if you don’t, who will?’ And that focused my mind.”

Fast-forward two and a half years and Georgie Dent’s opinions are in strong demand, requested by programs and publications such as The Drum, Sky News, The Morning Show, The Today Show, Lateline, the Herald Sun and ABC News 24.  Having a strong media profile was never her ambition but the same time, this former lawyer and journalist says it doesn’t feel foreign. And a little vitriol now and then isn’t going to stop her.

“You need to see what you’re up against and horrible as it was, I could see that these views on social media, it’s not aliens that are creating them and sending out spam. These are actually real-life people who we sit next to on the bus or at work. This is what we’re up against and it focusses the mind – as well as broadening it.”

To hear more from Georgie Dent and fellow media commentator Melissa Browne about how best to build up a considered media profile, tune in to Gaia Coaching Group’s LIVE webinar So You Think You Can Talk Media? Wednesday February 24, 12noon – 1pm. Tickets can be purchased here https://www.facebook.com/events/1009286132466070/