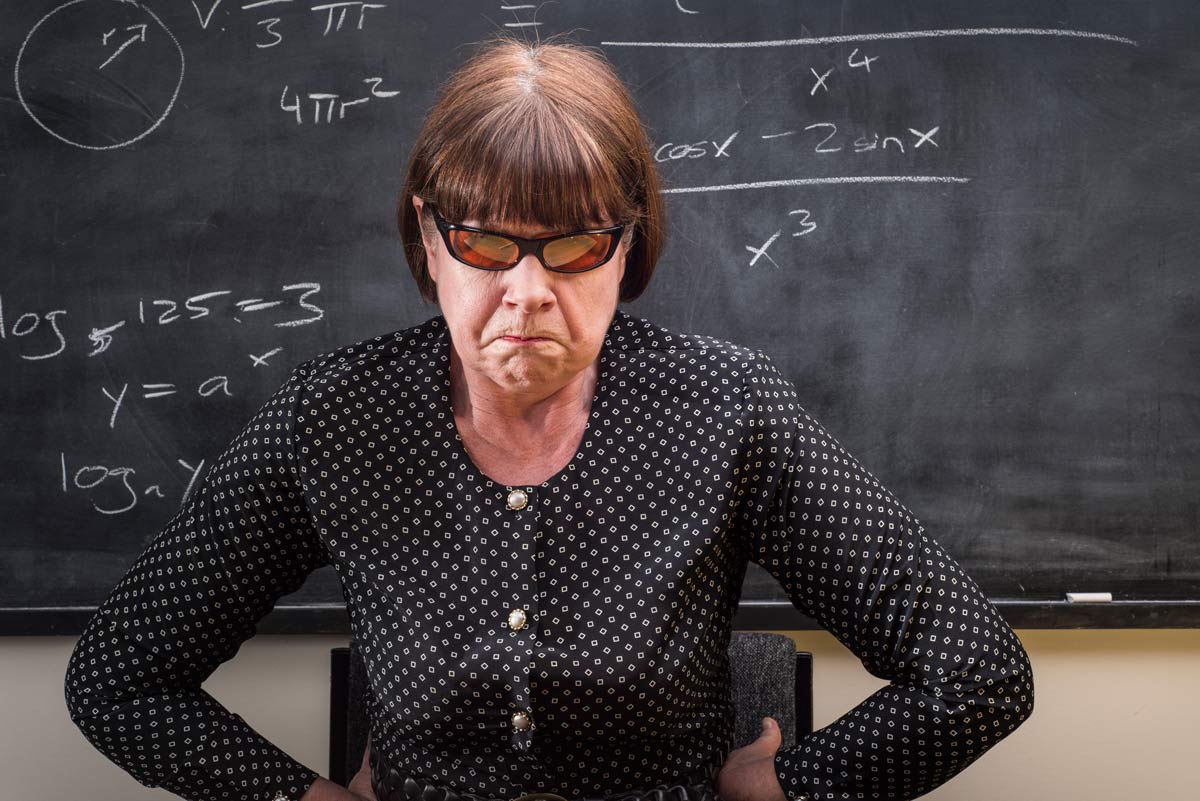 Last week I encountered an actual, real-life battle-axe.  You know, one of those women the dictionary defines as  ‘formidable, aggressive and domineering’.

It was in my child’s school hall.  Myself and dozens of other parents of Year 5 students had come to listen to local principals talk-up their high schools because we have some serious decisions to make between now and the end of 2017.

So how do you choose a high school for your child? It’s probably a mixture of things: location, reputation, results and cost to name a few. One of the biggest factors would have to be culture, yes? That’s why parents are so keen to eyeball the principals: to get a flavour of the school, to meet the leader, to get a feel for the man or woman behind the institution that we’re entrusting our children to.

I’m delighted to say that two out of the three principals on stage last week were outstanding. The third, however, has a serious image problem. But it’s a problem that I can fix!

She’s the principal of a highly-respected public girls high school. The school, while local, is selective and there’s fierce competition to win a place. Its HSC and NAPLAN results speak wonders and so the principal, let’s call her Janet, is understandably proud.

But there’s a catch. The local catchment area of this school gets smaller every year. So while your daughter may get into the school via a Gifted & Talented program, she may not get in through general enrolment, despite how close to the school she lives.

When it came time for questions, this dilemma was put to Janet by a mother of several girls. It was along the lines of:

“I live near your school, on purpose, so my girls have the best chance of getting in, yet you can’t guarantee that this will happen. Every year the catchment changes. How am I supposed to plan, based on that scenario?”

It was a fair question and one that Janet must be used to getting asked. Yet her answer satisfied no one.

She began by giving a history lesson, explaining how the catchment had changed over the last twenty years. Her explanation took so long that the mother interrupted in exasperation, saying:

“You’re not answering my question”.

“EXCUSE ME, I AM ANSWERING YOUR QUESTION,” Janet  thundered back in a loud, stern and condescending voice.  And from that moment on, she became a battle-axe.

She continued her answer but by then, the damage was done. She’d put the whole room off-side so no wonder that the next question to come her way was: “

When do you retire?”

So what else could Janet have done? Her answer was entirely truthful and factual. She didn’t offer the mother false hope, or blame the system. She just stated the facts (though she took an awfully long time to do it).

When you’re facing tricky questions, whether from a journalist, a huffy parent, an enraged shareholder or angry residents, it helps to use the Bridging technique. Bridging is about quickly and succinctly answering the question, not avoiding it. Then it’s about creating a verbal bridge from your answer to your key message.

Before you answer a tricky question you have some choices to make. Do you want your answer to Acknowledge, Attempt or Address the question, before Bridging to your key message? All three options are good, as you’ll see below:

ACKNOWLEDGE: (where simply acknowledging the criticism/concern can be enough to placate).

Janet: “Thank you for that question, I know it’s one that vexes a lot of parents and I can well understand why: it is difficult to plan for high school when catchments change continually. However, my advice is to keep in touch with the school, and become very familiar with our Gifted & Talented programs because it may well be that your oldest daughter is accepted through one of those streams and once she’s in, your other daughters will be guaranteed places. But again, I acknowledge that it’s a difficult system and sympathise with you.”

ATTEMPT: (where you try to answer the question but give a solid, truthful reason why you can’t).

Janet: “Thanks for that question, I’m sure the answer is one that many parents in this room wish to know. Sadly, I’m unable to answer it because I simply don’t know where the catchment boundaries will be in 2018 because it’s not up to me. In many ways in would be much easier for the school, as well as parents, if I did know, but I just don’t, I’m sorry. What I can say is that there are many girls at our school who are there because of our Gifted & Talented programs, not their location, and I encourage you to explore those options as a way of securing a place.”

ADDRESS: (where you either go ‘big picture’ or micro, as a way of addressing the underlying issue behind the question).

Janet big picture: “Thanks, that’s a great question because it goes to the heart of what’s concerning you: fairness and equal opportunity for your daughter. My school is a wonderful school and I would love to open its doors to every local girl but sadly, it just isn’t big enough. However, as a local principal in touch with all schools in our area, I know that this region is blessed with many top-quality institutions so I can assure you, your daughter will find a place and the opportunities she deserves. That place may even be in my school – I urge you to read all about our Gifted & Talented programs in case that’s one avenue to try – and please, put her name down for general enrolment too.”

Janet micro: “Thanks, that’s a great question because it goes to the heart of what’s concerning you: fairness and equal opportunity for your daughter. I have several parents at my school who asked exactly the same question in years past and I’m pleased to say I was able to offer their daughters a place, either through our Gifted & Talents programs, or through general enrolment. I can’t guarantee that, of course, but I’d be pleased to put you in touch with the P&C who can offer you its insights and support into the process.”

As you can see, Janet had several options other than adopting the historical answer and tyrannical tone. If she had used the Bridging technique, she would have come across as understanding, empathetic and constructive as well as getting the cold hard facts out.

As it was, I asked several mothers of daughters what they thought of the principal’s performance, and whether they were still keen to send their girls to her school. The answer was a resounding “Based on the principal? Absolutely not.”

I can teach you how to Bridge effectively and give you plenty of practice runs before you face a potentially hostile audience.  It pays to be prepared so call Heard Communication on 0418 821 726 to arrange a training session.