How To Talk Off-The-Record 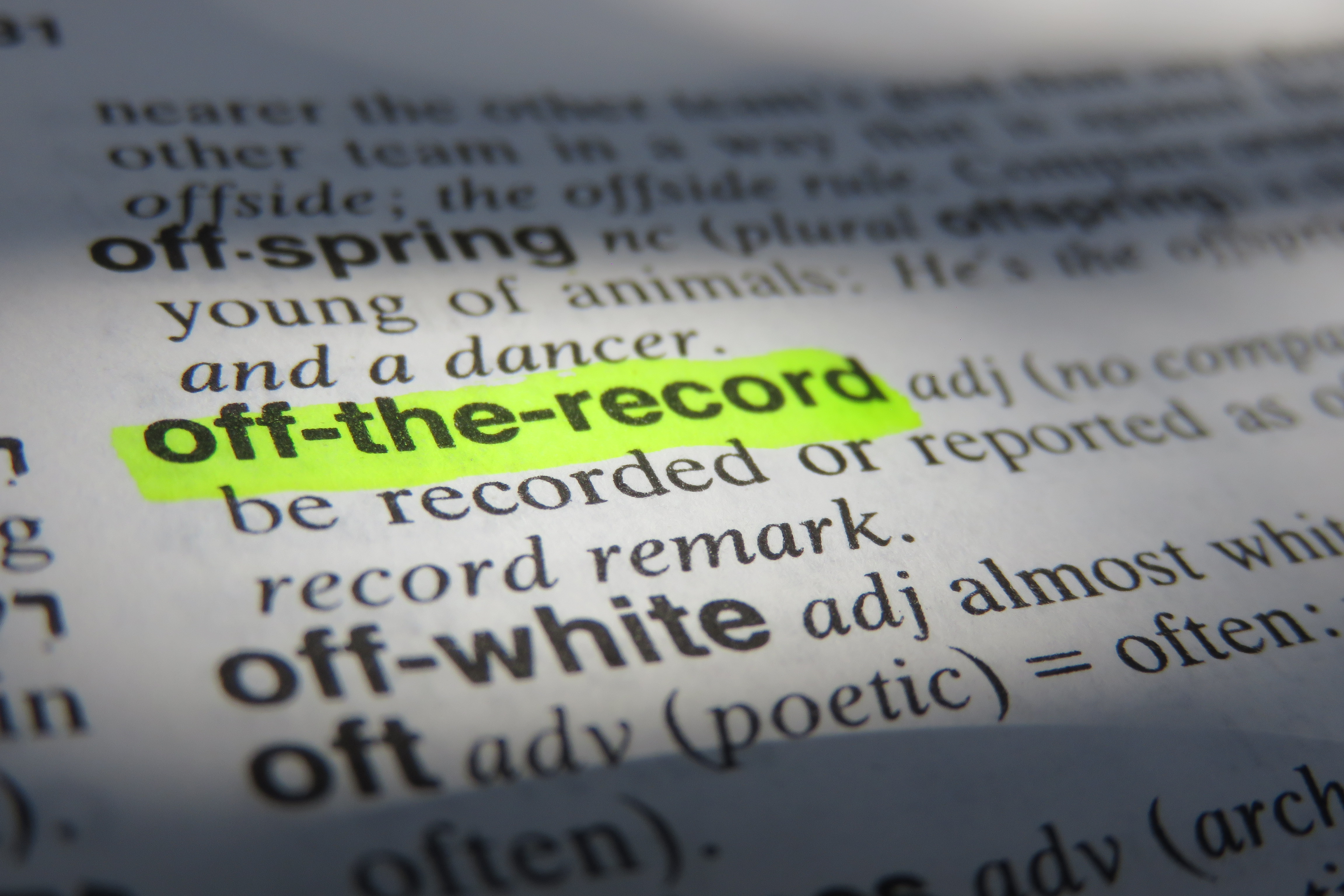 This week I met the CEO of a large company that’s taking on a highly controversial project. Despite the potential for public backlash and reputational harm, this CEO has sound reasons for getting his company involved. Through speaking with him off-the-record, I was able to grasp those reasons too.

Whether I agree with those reasons is irrelevant. What’s important is that I understand why the CEO is taking this position, and that allows me to see the other side of this issue more clearly. Now I can present both sides well, should I ever be asked to report on this.

In other words, by going off-the-record with me the CEO ensured that my reporting will be better-informed.

What does talking to a journalist “off-the-record” actually mean?

1.      THE TERMINOLOGY
“Off-the-record” is interchangeable with other phrases such as “for background only”, “not for attribution” and “Chatham House rule”.  They all mean the same thing, essentially. AND THEN THEY DON’T. See below.

2.      “OFF-THE-RECORD” MEANS DIFFERENT THINGS TO DIFFERENT JOURNALISTS
When journalists are learning their craft, no one teaches them a set meaning for “off-the-record” and all those other phrases. Each journalist just figures it out for themselves as they go along in their career. Crazy I know, but true.

So if you’re planning to speak off-the-record, set your own rules for what “off-the-record” means to you, and make sure the journalist understands your definition.

4.      SET THE RULES BEFORE YOU SPEAK
You can’t go off-the-record after the fact, so don’t even try. Everything you say to a journalist is considered on-the-record unless you stipulate the conditions beforehand.

If you have a Communications/Publicity person, this is the person who should set the rules with the journalist prior to the interview. If you handle your own media interviews, then you need to do it.

THINGS TO REMEMBER
Going off-the-record plays an important part in building relationships with key people in the media.  It’s in journalists’ best interests to work with you on this, and many have been known to go to great lengths (including jail) to protect their source. In fact, the Journalists Code of Ethics in Australia specifically says that “Where confidences are accepted, respect them in all circumstances.”

However, also note that this same code asks journalists to “…aim to attribute information to its source. Where a source seeks anonymity, do not agree without first considering the source’s motives and any alternative attributable source.”

So what does that mean in practice? A couple of things:

·      If the journalist comes back to you at the end of the interview and asks you to waive the off-the-record agreement, don’t be surprised. They’re supposed to attribute information wherever they can. But if you don’t want to waive it, stick to your guns

What’s key here is the issue of trust. The journalist trusts that you’re giving her accurate information that simply can’t go on-the-record, and you trust that she’ll abide by your conditions.  Therefore, only go off the record with someone that you have reason to trust.

ONE LAST THING
Well, a couple actually. Firstly, just because you go off-the-record don’t expect favourable treatment from the journalist. You’ll be treated fairly in any story they produce, but not favourably.

Secondly, just because you’re talking off-the-record, don’t go shooting your mouth off about anything and everything. Say what you wanted to say, and stop.

OK, consider yourself briefed. Now go find a journalist you trust and help them understand your perspective. You’ll be doing both of you a favour.