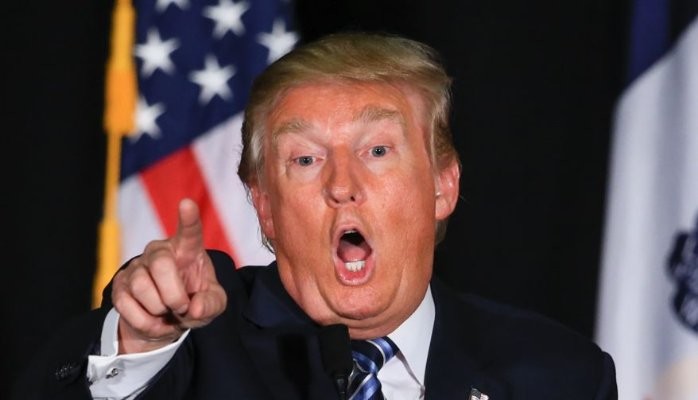 Why? Because he practices linguistic austerity.

‘And that is?’ I hear you ask. Good question. It’s the practice of using short words instead of long ones.

In this article published in Politico Magazine the author Jack Shafer explains that Mr Trump talks like a child in the third grade. In the author’s words: “He prefers to link short, blocky words into other short, blocky words to create short, blocky sentences that he then stacks into short, blocky paragraphs…By not conforming to the standard oratorical style he distinguishes himself from the pompous politician. Less is more when you’re speaking Trumpspeak.”

Ben Macintyre from The Times similarly writes: “He entirely eschews the rhetorical and ornamental flourishes of most campaigning politicians. His sentences are sometimes as short as five syllables and seldom more than 15, with the most important word at the end of the sentence…The effect is blocky, chunky, punchy, and instantly intelligible…Where George W Bush wrestled with the language and frequently lost, Trump chops it into easily digestible lumps; linguistic chicken nuggets.”

Take these nuggets, for example. These come from an interview Donald Trump did in April 2016 with Fox News about his foreign policy platform. On the subject of ISIS in Iraq and Syria his answers were full of short, repetitive statements:

Whether you agree with these nuggets of information or not, they are easily understood. They cut through.

When I train people to do effective interviews with journalists that’s exactly what I’m looking for – easily digestible lumps of knowledge/opinion. Every journalist wants to hear that. No one wants to listen to someone drone on for five minutes using incomprehensible jargon, unnecessarily long words and ridiculously convoluted sentences. We want you to say something that will cut-through.

Inevitably, I find resistance to this idea. Often, clients think using simple words and short sentences means they’re dumbing down their message. Take the university professor who argued relentlessly (and pompously, I might add) for using the word “computation” instead of my suggested “calculation”. Or the agriculture expert who couldn’t understand what was wrong with the phrase “point of inflection” to describe his sector, rather than simply stating that it was “really starting to take off”.

It’s all about cut through. No one is totally focussed on the news. The father with the 6pm bulletin on the telly is also trying to cook dinner, help his child with homework and pay a bill. The woman listening to the radio news as she drives to work is also juggling peak-hour traffic and her mental to-do this that day. The worker taking a lunch break has only one eye on the newspaper because the other eye is on the time.

If you want to grab their attention, short, memorable words in short sentences are the way to go.

As the author of the Politico Magazine article points out, using simple, short language doesn’t mean you’re a nincompoop. Sections of Mark Twain’s The Adventures of Huckleberry Finn, a book written in the voice of a poor, illiterate boy, “manages to communicate the great complexities of 19th century American life, especially on the topics of race and justice.”

You too can convey the complexities of your industry, your organisation, your issue using powerful, meaningful, accurate yet also simple language. This type of language makes you appear more authentic and, therefore, more trustworthy. It’s certainly working for The Donald and, like him or loathe him, he’s certainly achieving a high level of cut-through that just might win him the presidency.